Former 80’s touring musician, voice-over actor for radio stations Nationwide and current National Headliner, Doug is a busy guy. Doing over 330 shows a year and prettyn- much living in his car for awhile, Doug is the epitome of the term “Road-Dog comic”. Having worked for a few years as a house comic at the famous Coconuts Comedy Club, on St. Pete Florida, he sharpened as a performer and Coconut’s became his home club. Other successful comedians like Larry the Cable Guy, Jim Breuer, Kevin James, Billy Gardell and Mitch Hedberg also worked Coconuts and considered it home.

Doug’s performances are Spastic, fast pace and never dull as he weaves his self deprecating southern charm.
He’s been seen on HBO, NBC, The WB Network and heard on syndicated radio all over the nation.
His hometown is New Bern North carolina, he now lives in St. Augustine Florida.

2ND HEADLINER SHANNON HALL!
Shannon a comedy veteran comes at you with high energy material that bounces from Florida Life, world travels, relationships marriage and getting older. He has opened for huge name in comedy Jerry Seinfeld, Larry the Cable Guy, Darryl Hammond of SNL and Tommy Blaze!

These shows are always brought to you and hosted by Sunrise Theatre and Casey N Spaz Comedy!!!
Full Bar, Free popcorn, a chance to win free tickets to a future show all for only $15 advance $20 at the door! 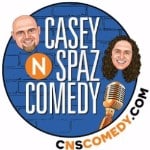