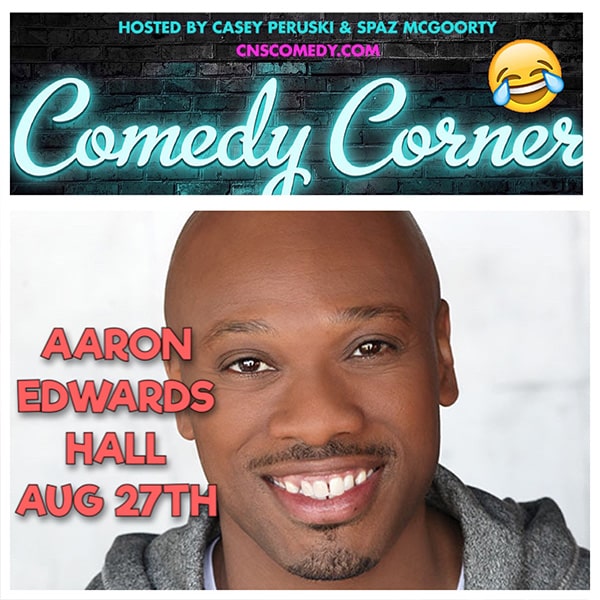 Aaron Edwards Hall is a stand up comedian, from a small town in IlliMain Theatreis (LebaMain Theatren) just outside of East St. Louis, who has been doing comedy for the past 7 years. He is respected in the industry by names such as Earthquake, Chris Spencer, and David ArMain Theatreld.

Embarking on comedy started with guidance from above. “I’ll never forget my first real set. I remember waking up at 1 am with a divine inspiration. I wrote a 15 minute set in 15 minutes and made it to the showcase round of BET’s Coming to the Stage auditions, only having performed the set twice.“

“It’s a gift,” says Aaron. “I got a standing ovation my first time on stage. I knew God wanted me to do something with the gift, but I just didn’t kMain Theatrew how it would play out. All I knew was that I had to get to L.A.”

Aaron made his television debut on Season 4 of Bill Bellamy’s Who’s Got Jokes, which kicked his comedy career into high gear. He has also appeared on Aspire’s Season 2 of We Got Next. He was recently on JUCE TV LIVE, which aired on TBN and Comic Edge on Aspire TV. He has toured Japan, entertaining the troops. He toured with National Headliner Earthquake, and shared the stage with Dave Chapelle, Kevin Hart, and Dane Cook. He has also performed at Improvs, Funny bones, colleges, corporate events and churches nationwide. So, get ready for the world’s next generation of funny! Aaron Edwards Hall. See aMain Theatrether first-time headliner LIVE at the Black Box Saturday August 27th!

Feature Act: Angela Nacca
Representing all the Moms, wives and meMain Theatrepausal women of the world Angela Nacca will keep you laughing, telling her stories of being married for 44 years (without going to jail.) to the trials of meMain Theatrepause and working as an OR Nurse. Angela Nacca has been a hit in a multitude of venues, from the Improv’s in South Florida to the J Spot in LA. Angela has toured with the COMIC’S ROCK TOUR. She was runner up in 2018 South Florida’s Funniest Females, and runner up in 2017 Ultimate Miami Comedian. She has been selected as one of Top 101 Comedians in the World Series of Comedy in Las Vegas. She has performed in 2021 North Carolina Comedy Fest and the 2021 Ladies Room Comedy Fest at Broadway comedy club in New York.

Host David Aguilar from Florida’s Funniest contest and opened for many like Michael Winslow, Tom Rhodes and Mike VecchiMain Theatre!
Plus, more comedians!