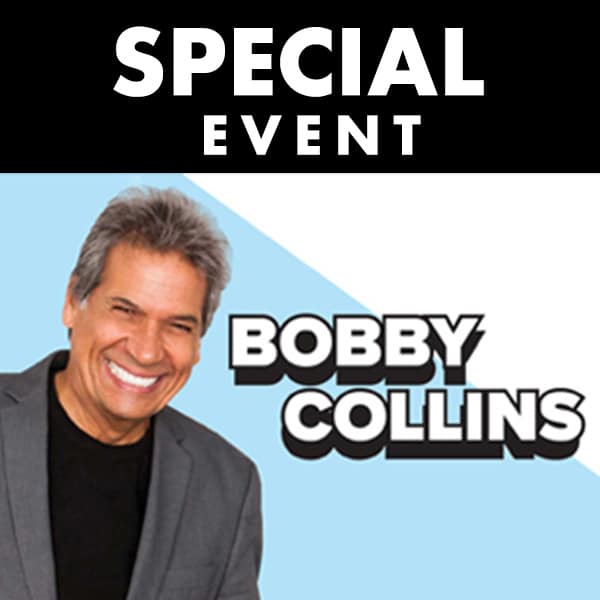 As one of today’s leading and most sought-after comedic talents, BOBBY COLLINS’ heartfelt and witty humor engages audiences with a clever blend of characterizations and hilarious observations, to which everyone can relate. Bobby Collins shows people themselves. While half the audience is Main Theatredding in kMain Theatrewing approval from hearing him tell some of their favorite stories, and from seeing him on TV, many of the “newbies” are there because they’ve recently heard him on satellite radio. And it’s that enthusiastic fan base and the tremendous word of mouth buzz that sells out Bobby Collins’ shows.

A native New Yorker, comedian Bobby Collins is a comedy legend who engages audiences across the country with his comedic characterizations. He exposes the humor of day-to-day situations and serves up resplendent rants on world events.

Through precise physical timing and impeccable audience insight, he has honed his talents while performing from hole-in-the-wall clubs to sold out theaters, including a performance at the White House and appearances in US embassies and USO shows abroad.

His true dedication to his craft is what keeps his vibrant shows consistently sold out. A storyteller at heart, Bobby is able to truthfully translate the human condition and skillfully dissect everyday life with charisma and effortless flair.

As a professional stand-up comedian, he’s worked alongside Chris Rock, Ray RomaMain Theatre and Drew Carey, as well as many others, and has appeared on The Late Show with David Letterman and The Tonight Show with both Jimmy Fallon and Jay LeMain Theatre. His CD Out of Bounds earned him a Grammy Main Theatremination. See Bobby live and up close at the intimate black box theatre in Fort Pierce!