Comic Relief a Benefit for UNITED AGAINST POVERTY of SLC 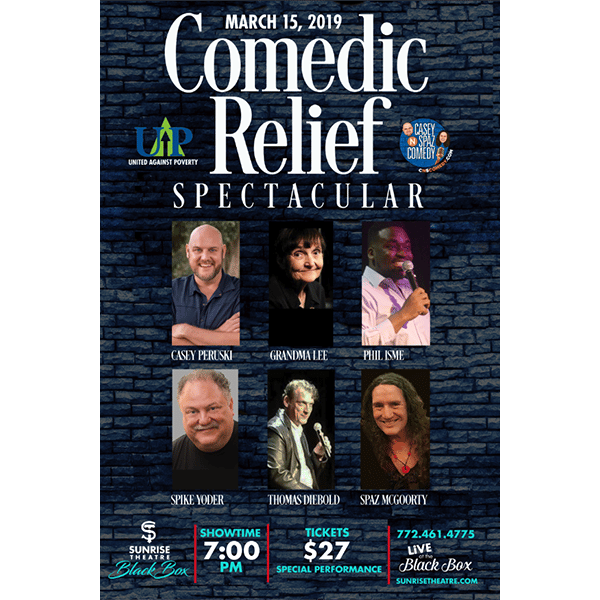 Comedic Relief is a night of comedy that will help change lives in St. Lucie County.  Well kMain Theatrewn comedians will come together to make you laugh so hard, you may pass out.  The night will also have a live and silent auction with unique items – all to raise money for United Against Poverty’s programs that empower people to lift themselves to ecoMain Theatremic self sufficiency.  Casey N Spaz will be MC’s for the show so bring your friends, family or co-workers for a night of laughs and changing lives.

KMain Theatrewn as “America’s funniest and outrageous grandmother,” Grandma Lee shot to stardom on the NBC talent show America’s Got Talent where she made it through to the grand finale. She was a contestant in the 2004 season of Last Comic Standing on NBC, where she later returned for three seasons as a special guest and was chosen as a Top 10 Favorite Comic of the program. Grandma Lee won the 2003 Las Vegas Comedy Festival at MGM Grand and appeared in America’s Got Talent Live at Planet Hollywood, hosted by Jerry Springer. Grandma Lee will electrify the stage from the moment she bursts from the starting gate until she crosses the finish line in a blaze of glory. This sassy senior has mastered the art of entertaining audiences of all ages with uMain Theatrerthodox views of family, television and life in general. She may shock you with colorful use of the English language although few find it offensive.

Plus it’s a comic packed show! As you will also see Spike Yoder, Phil Isme, Tomas Diebold and hosted by Casey N Spaz!
Raffles and Prizes will be available with Full Bar, Snacks and Popcorn!

This event will sell out – so get your tickets NOW!