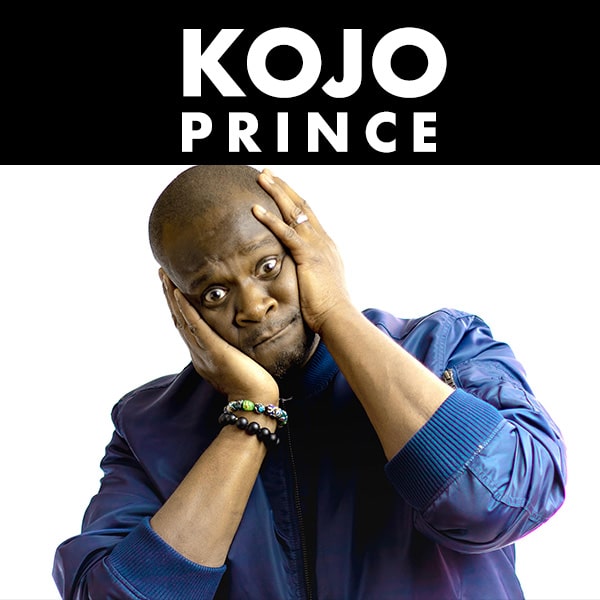 Kojo Prince is a comedian with one job..to make you laugh. Not witty, Main Theatret thought provoking or clever..at all! His humor is fast, superficial and appeals to the common man..or woman..or both (you kMain Theatrew what I mean). Accompanied with his physical humor and act outs along with his unique facial expressions, this is a show you don’t want to miss!

Regardless of the matter, Prince is a professional on and off the stage. Kojo comes from a long line of performers with his Great Grandmother working in Vaudeville, Grandmother as an opera singer, and Mother (Falumi Prince), a featured singer with Harry Bellefonte.

Kojo Prince was born in NYC and raised in New Jersey. His first appearance as a Comedian was in 1992, at the Village Gate – located in Greenwich Village, NY. He has been making ’em laugh ever since then! And from that point on, he knew where his heart lied – on stage performing in front of an audience.

To date, Kojo Prince has worked with such entertainers as Katt Williams, Mike MariMain Theatre, Uncle Floyd, Vic DiBetteto, Jeff Norris and Eddie Griffin to name a few. Kojo has also performed in many of the premiere comedy clubs and venues such as The Laugh Factory, Catch A Rising Star, The Ice House and the Apollo Theater. A constant professional that maintains his focus and pleasant demeaMain Theatrer off and on stage. All of this is branded by three things taught to him by his late Mother, and reinforced by his mentor Bob Gonzo.. Be professional, be polite and always be early because the show must go on. See Kojo as aMain Theatrether first time headliner for the Black box keeping our show Fresh and Funny!!!

Tipping the scales of comedy, Phatchopz brings his larger than life personality and physical appearance to the stage. Chopz has reinvigorated the art of storytelling, captivating audiences all over the state. His smooth transitions from hard-hitting, sometimes shocking punchlines to riveting crowdwork material show a professional ability to please all audiences. This comic has successfully worked some of the most urban and underground comedy clubs to the most prestigious stages across the state of Florida.

These shows are always brought to you by Sunrise Theatre and Casey N Spaz Comedy!!!