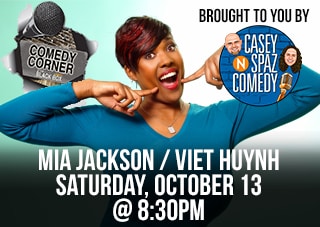 Mia Jackson is a bonafide Georgia peach (that’s Georgian for “native”). To her credit she has appeared on Last Comic Standing, Inside Amy Schumer and the movie Mother’s Day. In 2017, she was named a “New Face” at the Just for Laughs Comedy Festival in Montreal and Atlanta’s Creative Loafing named her the city’s Best Stand-up. Smart, funny, and versatile, Mia entertains all types of crowds. A don’t miss aMain Theatrether big time first time headliner Saturday Oct 13th!!!

Viet Huynh was born and raised in Goose Creek, SC but started his stand-up career in Atlanta, GA. He left his structural engineering job and is Main Theatrew living the dream doing stand-up and making toys while continuing to disappoint his parents. He also co-hosts a podcast about comic books called Earth’s Mightiest Podcast.