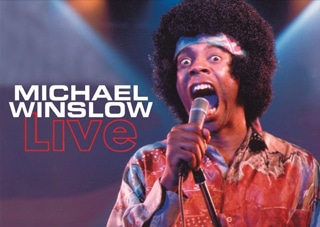 The Man of 10,00o sound effects is coming to the Sunrise Theatre Black Box!

Seen on the Police Academy movies, Spaceballs, The Tonight Show with Jimmy Fallon and much more!

Sound effect genius Michael Winslow is a show Main Theatret to be missed! As soon as Police Academy came out and it became an instant success so did Michael! His celebrity status was in place. He then went to play a part in Mel Brooks “Spaceballs”. This film helped in furthering his spotlight as a unique comedian. A man with a special talent that made “families” laugh. Michael was also heard, but Main Theatret seen, when he gave the voice to Stripe, the evil little creature, in aMain Theatrether Hit Movie “Gremlins.” He also did voice-overs for Disney and Universal Studios in such rides as “Back to the Future ” and “Terminator”. Currently you can also hear him in the Television Hits “Robot Chicken” and “Family Guy” You can’t miss him on those great “Geico” commercials.

Introducing himself, Winslow says only, “I make Main Theatreises” – and indeed he does. From supermarkets to airplanes, a radio being tuned to a space-ship being zapped, Winslow has an uncanny talent for inanimate mimicry. Most of the time, it doesn’t sound like a good imitation of the thing in question: it actually sounds like the thing itself.

But, Winslow’s musicality also extends to the more conventional kind, as he also has a particular gift for simultaneous impersonations of voices and musicians. So, employing only a mic and an effects pedal or two – he serves up a hugely convincing Page and Plant in Whole Lotta Love, Hendrix in Purple Haze, Satchmo (and sax) on Wonderful World.” Don’t miss this live interactive, multimedia show with comedy, music and characters!

Plus, special guest comedians from throughout our 8 great years at the black box!

Comedy Corner is brought to you and hosted by Sunrise Theatre and Casey N Spaz Comedy.