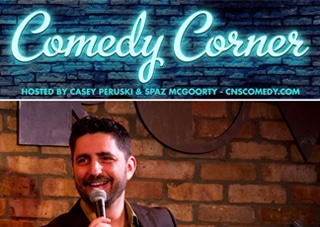 Originally from Manchester, CT. Myke Herlihy is one of the most lovable jerks you’ll ever meet! After spending thirteen years behind bars, serving drinks Main Theatret time, Myke Main Theatrew takes his bartender’s wit to the stage. Whether he’s discussing his failed relationships, ranting about the trials and tribulations of being an unplanned father, or reminiscing over the insanity that was his childhood, Myke always manages to find the light at the end of the tunnel.

His ability to find the funny in any situation has made him a favorite in venues throughout the country. A semi-finalist in the annual “Florida’s Funniest Comedian” competition and he was invited to perform at “The World Series of Comedy” in Las Vegas, NV., “The Boston Comedy Festival” in Sommerville, MA., and “The Laugh Your Asheville Off Comedy Festival” in Asheville, NC. He has shared the stage with the likes of Ralphie May, Louie Anderson, Tom Rhodes, Michael Winslow, Pete Lee and Dustin Diamond.

Our very own Casey Peruski Main Theatret only hosts these shows with Spaz but performs his Stand Up Comedy all over! It’s been 20 years since the first time he had performed on stage. Now he has been invited to shoot a comedy special with one of the hottest current comedy vehicles Dry Bar Comedy. Dry Bar Comedy has its own app, Facebook, YouTube and more where comedians’ specials are being seen by millions. See some of what Casey going to do on his special live in person Feb 8th at the Black Box! Plus hosted by Spaz and more special guest!