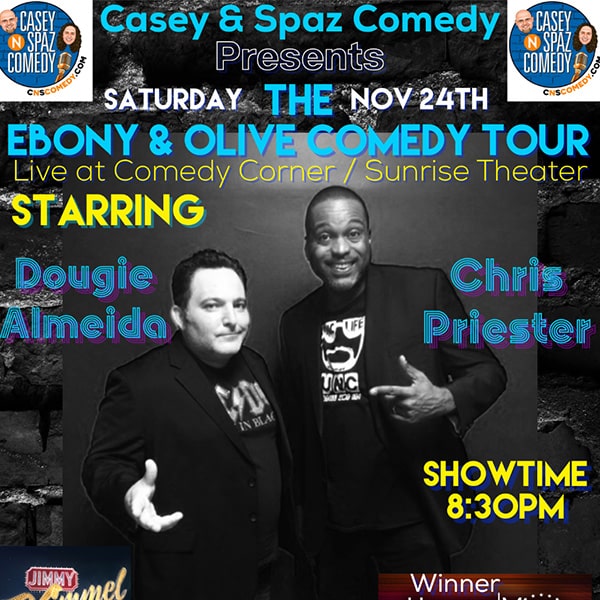 DOUGIE ALMEDIA
Hailing from Queens, New York, Dougie Almeida spent most of his adult life as a corporate presenter
for one of the largest financial planning firms in the country. His specialty was taking lifeless
insurance presentations and transforming them into works of comic art. In his spare time, he fought
as an ISKA Heavyweight Muay Thai Kick boxer, retiring at 10-0 and earning the title “Always
Dangerous”. So, what do you get when you cross an inventive corporate executive with a retired kick
boxer? A stand-up comedian, of course!
Winner of Improv’s New Faces of Comedy &amp; participant in Laughing Skull Comedy Festival, Gilda’s
Laugh Fest, SLO Comedy Festival, Laugh Your Asheville Comedy Fest. &amp; Boston Comedy Festival.
Semi Finalist in Cleveland Comedy Festival 2013, Laughlin Laughfest 2014 &amp; Finalist in World Series
of Comedy Main Event 2015. Prior to taking the stage, Dougie gauges his audience, reaches into
his vault and prepares his onslaught of humor. Once on stage, he delivers blow after blow of hilarity,
hitting the audience with punch line after punch line. His wit and stage presence is second to Main Theatrene.
One thing is always certain – Dougie Almeida will KNOCK YOU OUT! Dougie Almeida is Always
Funny, Always Professional, and BlackBox Theatre, Always Dangerous. http://dougiealmeida.com/
CHRIS PRIESTER!
Chris Priester is the fastest rising star in comedy coming from Miami. He has made his rounds
performing in many shows all across the city and beyond, however his comedic talents were
uncovered in winning 2018’s season of Ultimate Miami Comedian at the Magic City CasiMain Theatre. And it’s
Main Theatre wonder, with his on stage charm, hilarious insights, and humorous jabs at being a family man. See
the Ebony &amp; Olive Comedy Tour for the first time in at the Sunrise Theatre Black Box Saturday
November 24 th at 8:30!
These shows are always brought to you and hosted by Sunrise Theatre and Casey N Spaz
Comedy!!!
Get tickets online at sunrisetheatre.com, box office 772-461-4775 or at the door!
All for only $15 Advance $20 at the door! All Comedy Corner shows have full bar, snacks, Free
Popcorn and ticket giveaways to Sunrise Theatre events!!!!!