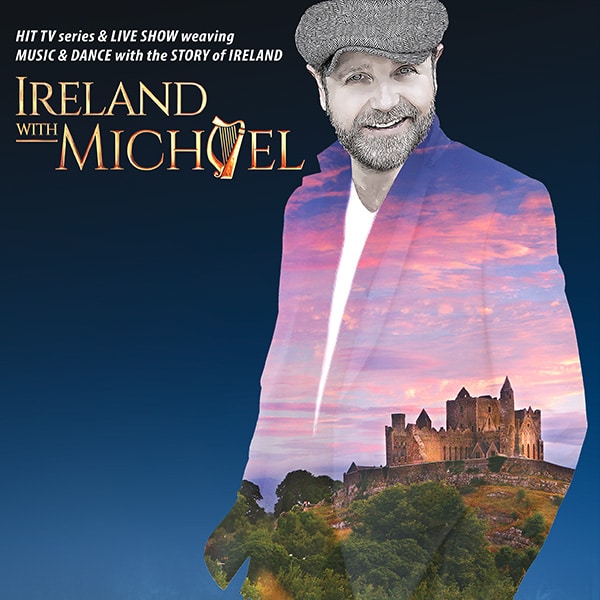 Ireland With Michael LIVE is a multimedia experience that combines the music, dance & stories of Ireland and features the ethereal voice of leading Irish tenor Michael Londra. Following the overwhelming success of Seasons #1 and #2 of the Ireland With Michael travel and music series on PBS in 2021 and 2022 (over 76% reach of all U.S Households and 6,000 individual airings across 50 states), the LIVE theatrical show based on the PBS program will tour U.S cities in 2023.

Emmy® award-Main Theatreminated singer and the Voice of Riverdance on Broadway, Michael Londra interlaces songs and stories of Ireland to a backdrop of spectacular footage filmed for his PBS travel series in his new show Ireland With Michael LIVE. In doing so, he creates an immersive journey around the Emerald Isle for his audience. Irish dancers, Fiddles and Pipes add to the feast of Celtic talent onstage, drawing the audience across the Atlantic Ocean to Ireland.

Ireland With Michael – LIVE is a celebration of Irish culture and music for the Irish American Heritage Month of March. Michael shares his own connection to songs and stories of his home county, his love of traditional music backed by his immensely talented band and world champion Irish dancers. The live concert is a perfect addition to St Patrick’s programming.

The stunning set for Ireland With Michael LIVE adds a multimedia dimension to the show. Conceptualized and designed by award winning Broadway Lighting & Projection designer, Patricia Nichols, the backdrop incorporates drone footage and excerpts from Michael’s PBS travel show of the same name. In both the Television show and in Ireland With Michael LIVE, Londra tells the story of Ireland the only way he knows how – through music.

To learn more about Michael or his tours of Ireland go to www.IrelandwithMichael.com