One Night Of Queen Performed by Gary Mullen & The Works 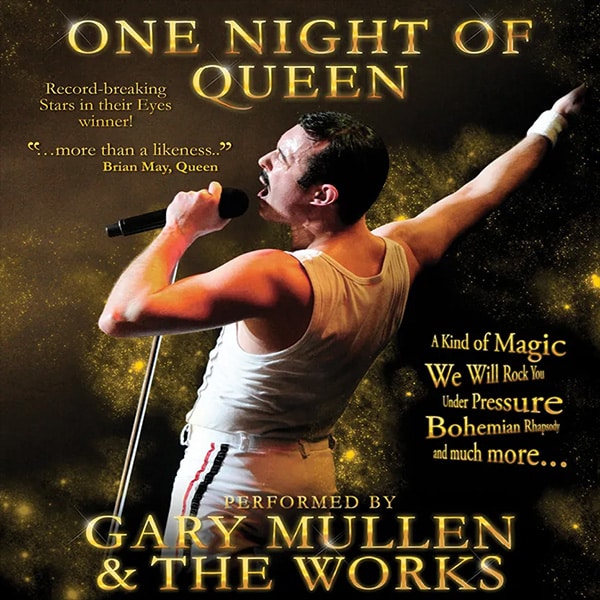 Scottish vocalist Gary Mullen is a legend in his homeland for his uncanny ability to channel the late, great Queen front man Freddie Mercury. ONE NIGHT OF QUEEN stars Gary and his band, The Works, and it’s a high-energy, fully-realized Queen concert, featuring state-of-the-art lights, effects and, of course, those classic songs: Bohemian Rhapsody, We Are the Champions, AMain Theatrether One Bites the Dust and We Will Rock You, among many others!

Since 2001, Gary Mullen and ONE NIGHT OF QUEEN have toured virtually Main Theatren-stop around the U.K., Germany, Portugal, Holland, Belgium, France and New Zealand, playing theaters, arenas and festivals to sell-out crowds on every shore. Rock ‘n’ roll fans couldn’t get eMain Theatreugh of Queen.

“Mullen brought legendary Queen front man Freddie Mercury back to life in a two-hour energy-filled concert that had toddlers to grandparents dancing in the aisles.” – NY Daily News

“It was like walking into a time machine…as Queen rocked the house, albeit in the form of “Stars in their EBlackBox Theatre” champion Gary “Freddy Mercury” Mullen and his band of impersonators.”
– Review, Plymouth, UK