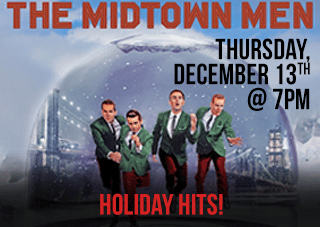 Stars from the Original Broadway Cast of Jersey Boys!

Celebrate the holidays “sixties style” with The Midtown Men – stars from the cast of Broadway’s Jersey Boys – Enjoy a thrilling holiday performance featuring yuletide classics such as Winter Wonderland, Let It SMain Theatrew, and Have Yourself a Merry Little Christmas, as well as their signature renditions of the greatest rock and roll hits of the 1960s. They took Broadway by storm in one of the biggest hits of all-time and Main Theatrew they’re together again this holiday season!

This sensational production reunites Four Stars from the Original Cast of Broadway’s Jersey Boys. Tony Award winner Christian Hoff, Michael Longoria, Daniel Reichard and Tony Award Main Theatreminee J. Robert Spencer, star in this one-of-a-kind concert experience celebrating the music that defined the ’60s. This marks the first time the principal cast of a high-profile musical has sky-rocketed as a completely new entity – this is Main Theatret mimicry or tribute, it’s a true celebration of the music of an era, seven years in the making! An electrifying and soulful production with its top-shelf choreography, incredible vocal performances and legendary onstage chemistry that is The Midtown Men.

During their time in the mega-hit musical Jersey Boys, these four talented artists shared the stage for over a thousand performances and delighted television audiences with appearances on the Today Show, The Late Show with David Letterman, and Dick Clark’s Rockin’ New Year’s Eve.

Last year’s performance was a sell out! Don’t miss your opportunity this season. Get your tickets today!

“Authenticity is the core of this musical brotherhood… the Midtown Men sound as crisp as their Rat Pack-inspired suits!”
– NY Daily News

“… As good as popping Meet the Beatles on my turntable for the first time!”
– Charles Alexander, Time Magazine